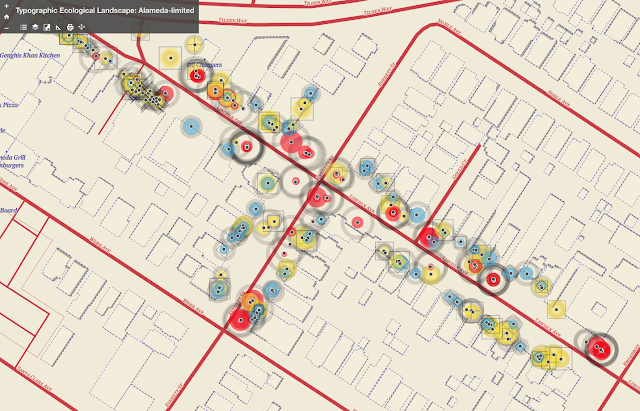 presented by AIASF and the Center for Architecture + Design San Francisco

How does the City, and its secrets, inspire artists and their work? AIASF and The Center reveal and explore alternate perspectives on the city of San Francisco in this curated selection of works from the following Bay Area artists:

..................................
Typographic Landscape Ecologies is an ongoing project that documents, maps, and visualizes typographic artifacts in the urban landscape as a way to explore cultural forces in the constructed world. It presupposes a model of a semiotic landscape; a complex multidimensional text or collection of texts; an ecology of discernable semiotic units that define a concept of a geographic space. It uses conventional research as a means to authoritatively document the landscape in an attempt to reveal patterns and relationships. It also uses experimental methods as a foil to the authority of conventional research as a way to generate speculative conclusions (the illumination of new knowledge is the ultimate goal of research and so we can assume that subjective and illegitimate conclusions have value by revealing something not yet known.) This does not offer concrete answers but rather poses new and unexpected questions.

For the 2017 "Secret City" Festival Exhibition at the AIASF and the Center for Architecture + Design San Francisco, the first phase of a documentation of Alameda California will be presented a part of a longer project being completed for Project Anywhere.